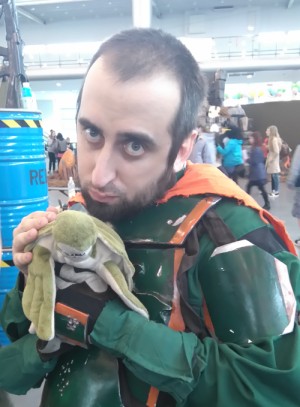 I am the type of person who is fully involved in a certain topic. And also the type of archivist, i.e. when I gets involved in something, I tries to organize the available knowledge on a given topic, collect it in one place, etc.

Over the years I have been a big fan of Star Wars (as a whole, not only cinema films, but literally everything that came out under the brand, tv-series, books, comics, games and so on), with particular emphasis on one of the factions existing within of this universe, Mandalorians. From 2007 to 2016, I was a member of Manda`Yaim, the Polish Mandalorian Community, from 2012 even their leader. As part of my activity in Manda`Yaim (and on Ossus library (Polish SW encyclopedia)) I created, co-created or initiated many projects that collect knowledge about Mandalorians in one place, in an accessible form.

To simplify, after the changes that Disney introduced to this universe some time after buying the SW brand, my passion began to burn out, in July 2016 I realized that the new SW does not give me joy anymore (to the “old” SW, Legends, I still have a lot of sentiment and I like to refresh some elements sometimes).

But then a different passion was sprouting in me sharply, you can say that it was not that distant – Mandalorians are creatures in armor, turtles, are also creatures whose best-known attribute is armor.

And so I began getting to know everything there is to know about turtles, in terms of culture and nature (to not to overuse the word “scientific”). And then I started to think about creating a reservoir of knowledge about turtles, something that I can add to human extelligence in an accessible form.

And this is how TurtleDex was born. What is it, I described on the home page.