As in other spheres of human creativity, also in the field of music various “turtle elements” are present.

We have note with info (sometimes very basic) about Turtle Bands – the ones that have a turtle name (sometimes it’s the only turtle-thing in their activities). This text also shows the covers of music albums of these bands, if they contain some turtle elements (other than the band name itself). In a separate text we present CD, Cassettes and vinyls covers of other bands.

Of course, we also have note about Music Videos with turtle elements.

In the notes linked above, there is a lot of songs that refer to Pokemon or Ninja Turtles – however, the music directly related to these franchises (except for one song, Ninja Rap) is not there, all soundtracks, openings, other official music related to them are collected separately: TMNT, Pokemon – mainly in the form of various album covers.

An eight-volume book series written by Alan Dean Foster, the first six volumes were published between 1983 and 1987, the last two were released after a short break, in 1993 and 1994.

At the moment, fives volumes are described in the database, but according to our information, the turtle mage, Clothahump, appears in all eight books – when we read them, we will add notes about them to the TD.

Books in series:
Spellsinger
The Hour of the Gate
The Day of the Dissonance
The Moment of the Magician
The Paths of the Perambulator
The Time of the Transference
Son of Spellsinger
Chorus Skating

The trivia section contains a lot of various information. It is of course not a cross-sectional description of given topics, but only a few words.

As in other note-lists, almost at the very beginning we include a legend about how to see-read the icons that precede the game titles on the list. First, however, we will mention that in the game database we do not include games from the Pokemon, Ninja Turtles, Mario universes – as we can be actually 100% sure that some turtles are in them. About TMNT video games we prepared a general article, notes about the others will be available soon.

– Games with “anthropomorphic” turtles – all those who talk, of course, but also those who have silent roles, but behave not-like-ordinary-turtles.

– There is only a verbal mention in the game or a turtle in the form of a toy, drawing, sculpture (and other artistic forms) or only the shell (without the owner) is shown.

– A real live turtle appears in the game at least for a second. Also games with turtles visible in one longer or a few smaller scenes but without much importance for the plot.

– A real live turtle or turtles appears in the game and plays important role, but not crucial. It may be a longer fragment focused on them, or several smaller but distinctive appearances.

– There is a real live turtle or turtles in the game and they are the axis for storyline, they are the main character, etc.

– Games where ninja turtles are only mentioned in some way or appear in the form of a toy, drawing, etc. or music from ninja turtles is used.

– Games in which ninja turtles appear in some form on the screen.

– Ninja turtles appear in the game and play an important role, but not crucial. It may be a longer fragment focused on them, or several smaller but distinctive appearances.

– Games in which Ninja turtles constitute the plot axis, the removal of which would make the whole game meaningless (but as TMNT games are not described, this stamp will probably remain unused).

Color number 5 – Only a musical reference (hereinafter referred to as “turtle music” for simplicity) – at the moment these are mainly The Turtles songs used in the games. (Any use of TMNT music counts as a reference to TMNT, not music!)

– A song used in the soundtrack appears.

– A song appears, but it is woven into the plot, eg the characters sing it.

– Turtle music is an important part of the game.

– The game is all about turtle music.

In this section we have collected various short films we found and in which a turtle appears in some form. And what exactly are short films? First, a quote from researchguides.dartmouth.edu site: A broad category of films defined by their short running time in comparison with that of the feature film. For the purposes of the ‘Animated Short Film’ and ‘Live Action Short Film’ categories in the Academy Awards, the Academy of Motion Picture Arts and Sciences defines a short film as forty minutes or less. At the Venice Film Festival, the limit set in entries in the short film category is thirty minutes or less.

As you can see, the short film is not clearly defined – 5, 7 or 10 minute film/animation is unquestionably considered by everyone as short, but with longer things, it is not so obvious For the purposes of TurtleDex, at the moment, we assumed 30 minutes as the maximum duration qualifying movie as “short”.

We divided the notes into thirteen categories, according to several different criteria, such as production studio, turtle character, genre (i.e. live action/documentary), etc.:
Cecil – one of the most famous named turtles, so although all animations with him come from the Warner Bros studio described below, he got his own note.
Warner Bros – producer of the Merrie Melodies and Looney Tunes animations series
Toby – Similarly to the Cecil, he is a well-known turtle, he was animated by Disney, we described their works the note below, but he got his own note.
Disney – producer-tycoon on the animation market, created series such as Silly Symphonies, animations about Pluto, Mickey Mouse and many others.
Betty Boops, Flip the Frog, Strawberry Shortcake – Unusual , in one note we collected three “types” of animations, each of the three mentioned characters has 2-3 films (with a turtle element). Instead of making notes for 2-3 entries, we decided to describe them collectively.
Related to cinema films – Short films that are usually a small spin-ofss for a large animated film, like Kung Fu Panda, Toy Story etc.
Noveltoons – A series of animations produced for Paramount Pictures.
Live action – Everything with live people on screen (but not documentary, these are below).
Documentary – The name says it all. Mostly with real people, but there is also one animated.
Walter Lantz – Animations created by Walter Lantz.
Popeye – Animations in which the common element is Popeye the sailor appearing as the main character.
Various Tortoise and the Hare – Various shorts (mostly animated, but not all) telling the story of the Tortoise and the Hare.
Other animation – Various animations not falling under any of the groups above. 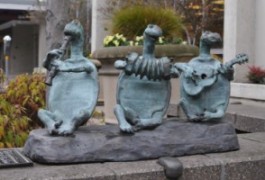 As the name suggests, this secton of TD focuses on advertising. Of course, with turtles, one way or another. We divided ads into fifteen collective notes, the title of each should quite well reflects what ads are discussed.

Advertisements related to Teenage Mutant Ninja Turtles and Pokemon we did not add to TurtleDex, assuming that especially in the case of Ninja Turtles, there would be too many of these ads to describe, and naturally, if something is an advertisement of a TMNT toy, it is for sure have some turtle elements.

As in other types of creativity, also in painting there are many artists who have devoted a certain dose of attention to turtles.

In the database we have collected rather older works, not modern ones, without detailed notes about the creators (only basic information, i.e. personal details, country of origin, years of life), the works themselves with titles, and of course you can see what is on them. You can easily google more information about artists if you want more information.

We divided our collection into four notes, divided by the origin of their authors, collected into groups, we tried to make the notes with similar size.
We have: French and Dutch | Belgians, Flemish and Spaniards | Italians | Americans, English, Austrians, Czechs, Indians, Germans, South Africans, Hungarians